This site generates income via partnerships with carefully selected travel brands and/ or purchases made through links to them. See why this is important.
You are here: Home / Uncategorized / Eating Around St. Louis, Missouri

We had barely three days in St. Louis. That’s not a lot of time to get out and try all the food St. Louis has to offer so I put out an plea and received a few recommendations. Other spots were chosen for their location to our activities. Here’s where we ate during our explorations:

Every morning began with the breakfast buffet at the Drury Plaza Inn. It had something for everyone. Fresh fruits, breads & bagels, cereal (it is here that my girls first tasted Lucky Charms), yogurt, milk, juices, coffee and tea are a basic Continental. Then add the hot off the griddle pancakes (made right in front of you), eggs, sausage and biscuits & gravy… That’s a breakfast that will fuel you through your explorations. 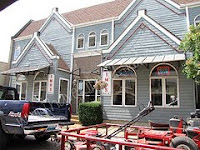 Day one’s excursion to the Magic House put us within a few blocks of Imo’s Pizza, a St. Louis institution.

This isn’t fancy dining; this is true St. Louis style pizza. Walk up to the counter, place your order and it will be brought out to you by a member of the friendly staff. This location only has a few tables though there is outdoor seating in nice weather. 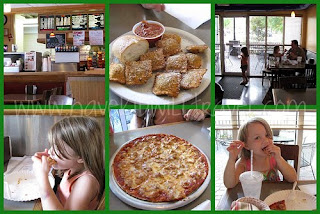 We ordered some fried ravioli which was tasty but not spectacular. The pizza, though, was another story. The secret in in the cheese, a tangy provel®, and lots of it. Delicious! Imo’s has locations all over Missouri and even some in Illinois. Not that close? Have Imo’s shipped to your door.

That lunch fueled us through til evening when we made our way to McGurk’s Irish Pub. If you’ve been reading this site very long you know that we love a good Irish pub and McGurk’s is one of the best in America. 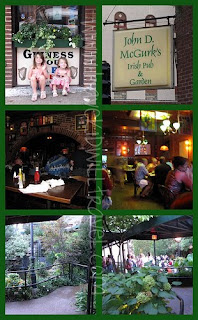 It’s a cozy pub (smoking) with restaurant attached (non smoking). But what makes this the place to be in the summer is the beautiful garden behind. Getting seating outside on a beautiful evening can take over an hour!

We sat inside, listened to the craic at the tables around us and enjoyed our Magner’s – the girls had chocolate milk. Our server was so kind- even when a napkin was dropped behind a heavy wooden bench seat- and our food was quite good.

We began with the Bacon Wrapped Shrimp appetizer, The jumbo shrimp were almost “steak-like”, they were so big and meaty. And the horseradish dip… To die for! We kept it at the table and Doug drizzled it onto the Guinness Stew- which was thick and hearty. It didn’t need the extra flavor but it was really tasty! My only problem with the stew was the bread bowl- it didn’t live up to the stew. 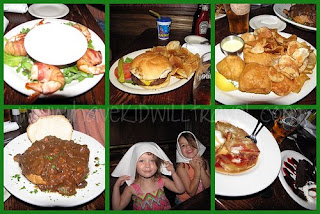 We ordered fish and chips, which was good but I’ve had better. The chips, however, are fresh and very crispy. They were the perfect side to the thick and perfectly prepared McGurk’s Burger the girls shared (which was also very tasty with the horseradish sauce from the shrimp).

You would think that with all that food we would be stuffed. Well, we were but we managed to make room for some Flourless Chocolate Torte and Traditional Whiskey Bread Pudding. The chocolate torte was so thick and rich; it was practically fudge. The vanilla bean ice cream on the side complimented it perfectly. And the bread pudding was divine. The caramel and raspberry sauces mixed with the melted whiskey butter and created a sweet sauce that almost made Doug lick the bowl clean.

McGurk’s also has live Irish music nightly. It “usually” begins around 8:30pm and is piped through the building. 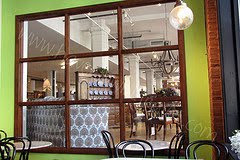 Day two took us to a bit more proper British dining at the London Tea Room. This charming spot opened a couple years ago next to the English Living Store (you can drool over the fine furnishings through a large window between the shops). 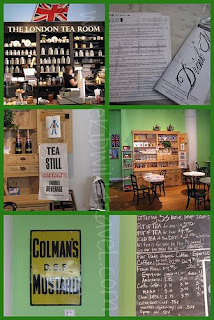 English to the core but not stuffy (and nary a doily in sight) this is a great place for a light lunch or an afternoon tea. The assortment of pastries at the counter will tempt you and, when you give in, will prove to be worthy of the long walk you’ll be taking to “work it off”. 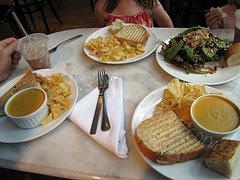 We thoroughly enjoyed our lunch of Strawberry Salad, Pumpkin Soup and sandwiches. Followed by yummy chocolate chip and shortbread cookies.

You can also buy loose leaf tea here to brew yourself. If you can make a proper cuppa, that is. Need the tools? Get those as well. Oh, they also serve coffee if you need a cup of joe.

Dinner on day two was at The Boathouse in Forest Park. You can hear all about it here.

Our final day in St. Louis was rather “off”. I had planned for us to eat at the Terrace Cafe at City Garden. Unfortunately it is closed on Sundays. So we ate where the Panera phenomenon began:

Same great bagels and pastries, soups, salads and sandwiches that you find across the country. It’s always a good choice. 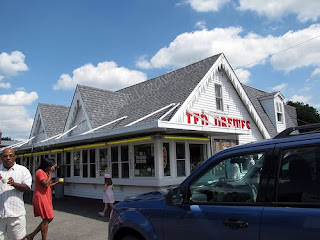 Before heading out of town we had one final stop to make- Ted Drewes Frozen Custard. I was told by quite a few people that this was a “must” while in St. Louis. The location we went to on Chippewa is along the old “route 66”. It’s not fancy; you walk up to the window and place your order. The girl at the window may offer you a Route 66 sticker. And you wait for your frozen custard. 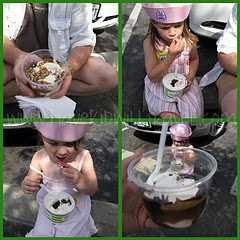 Which is huge! Oh my goodness! We should have paid more attention to what people around us were ordering! The girls each ordered a Crater Copernicus- devils food cake, frozen custard, hot fudge and whipped cream. Doug and I both ordered specials that were posted on the window. Doug’s had apples and caramel, mine had a frozen brownie in the bottom and a lot of fudge.

It was a sweet way to end our St. Louis adventure.