This site generates income via partnerships with carefully selected travel brands and/ or purchases made through links to them. See why this is important.
You are here: Home / Uncategorized / Kansas City Irish Fest, Labor Day Weekend

I am spending this week preparing for my workshops at Kansas City Irish Fest, so I thought we would revisit a post from a couple years ago.

If you’re planning to come to KCIF make plans to see me share travel tales on the Kids’ Stage both Saturday and Sunday.  You can also find me on the Heritage Stage on Saturday sharing tips for travel with kids and why Ireland is such a magical place for families. Kansas City Irish Fest, one of Kansas City’s favorite festivals, takes place Labor Day weekend, Friday thru Sunday, at Crown Center. Though this was our first time at the festival, 2009 marked the 7th year of celebrating Celtic pride in “Cowtown”.

Though I had browsed the website and tried to keep up with band announcements and other goings on at Tir na Blog I felt unprepared for the festival itself. I wasn’t sure just how family friendly it would be- or how crowded.

I shouldn’t have worried. After 7 years the organizers have the festival down to a science. Let me take you on a little tour… 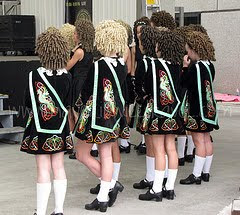 There’s no lack of entertainment. From over a dozen great Irish bands – everything from traditional pub tunes to new sounds that don’t compromise tradition- comedians and Irish dancers there is never a question of, “Is there something to do?” it’s a question of, “How can we do it all?”

The main stages, the Boulevard Stage and the State Street Stage, are at opposite ends of the grounds; far enough that they don’t overwhelm each other. In between are the children’s stage- which features puppets, storytelling, kids bands and workshops- and the Heritage Stage where you’ll learn Irish history, tips on genealogy, pick up a bit of the Irish language and maybe take a turn in a Ceili. 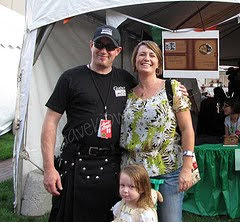 Don’t even think the kids are going to get bored. Sprinkled around the festival grounds are bounce houses (a fee applies for these), 3 children’s areas with activities, Irish Rock Band and Jig Jig Revolution. Trust me, you won’t run out of things to do! Whether you’re Irish- or you just wish you were- stop by the tents run by Kansas City’s Irish Organizations. Learn what they are doing- and what they have helped to do in the past. 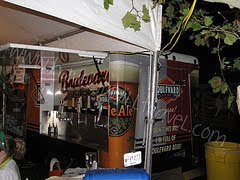 It’s a sad fact… You cannot get a Guinness at Irish Fest. Nor can you get a hard cider of any sort. Blame that on the fact that Boulevard Brewing Company is in Kansas City. Other alcoholic beverages are served as well as sodas and water. If buying from a beverage tent you must have drink tickets.

Food ranges from traditional Irish fare- Fish & chips, pasties- to fair foods like pizza, turkey legs and ice cream. No one will leave hungry. If you can’t find anything that suits you just leave the festival grounds (get your hand stamped for re-admittance) and head into Crown Center – where the food may actually cost less!

For a great Irish Breakfast head to Raglan Road. You won’t be disappointed. 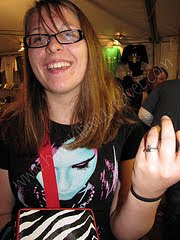 Where to Go When You’ve Gotta Go

With all the fun going on it’s esy to forget about the Irish Museum and Cultural Center in nearby Union Station. We stopped in to buy a book and spent quite a bit of time there listening to Tom Meehan, an Irish balladeer. He was very kind and let Brenna sing a few songs with him- Irish Rover, Leaving Liverpool and Molly Malone.