This site generates income via partnerships with carefully selected travel brands and/ or purchases made through links to them. See why this is important.
You are here: Home / Uncategorized / Levens Hall – History for kids with a Tasty Twist! 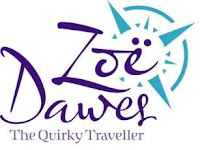 Today’s guest post comes from Zoë Dawes from The Quirky Traveller. I “met” Zoë on Twitter and she offered to share her views of travel with her 12-year-old son around the UK. I hope you enjoy her stories. I know they make me want to hop a jet and “cross the pond”! 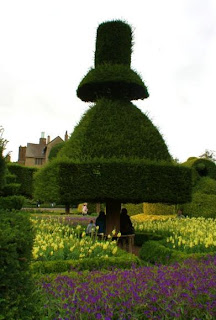 “Race you to the Witch’s Hat”, Alex, my 12year old son, shouted to his mate Charlie, as we wandered around the beautiful historic topiary gardens of Levens Hall, South Lakeland, Cumbria, UK. We were at Cumbria’s annual Chilli Fest, which takes place within the grounds of Levens Hall www.levenshall.co.uk just outside Kendal. It’s famous for its Grade 1 listed Gardens, originally designed in the 1690s. Children just love the topiary, which is cut into some quite extraordinary shapes including the wonderful ‘hat’ shown opposite.

The Chilli Festival happens every August, and has lots for both adults and children to amuse themselves with. Chilli Roulette was a big favourite; spin the wheel and have a 1-in-6 chance of getting a chilli choc instead of a milk choc. Alex ‘won’ one – his face was a picture as the chilli exploded in his mouth! 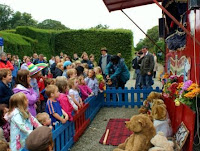 Another big attraction was the Puppet Theatre, which had a witch who tried to put her victims into a cauldron to make chilli soup – a big hit with the younger children, as you can see.

Brightly coloured stalls sold every kind of chilli flavoured products imaginably, including jams, chutneys, crisps, nuts, and, of course, hot, hot, hot sauces. Other attractions which we enjoyed included Salsa dancing, a Mexican band and the Children’s Chilli Trail which took them all over the grounds.

NEW FOR 2009 – A LIVING WILLOW LABYRINTH (HUNT FOR THE HARE)

Created from willow cuttings grown at Newton Rigg, near Penrith, the Labyrinth has been created by Chris Crowder & his team of gardeners during the winter months. The Labyrinth will grow during the summer months to form a green hedge and a maze will provide paths for children and adults to explore as they hunt for the elusive hare in its centre. 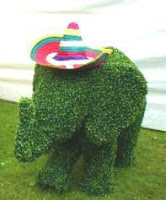 Historic Gardens Play Area
A new children’s play area has been established in the historic topiary garden with challenging climbing and slides for children under-12s and picnic tables for families.

The House has lots to keep children engaged. There are cabinets full of unusual things, old costumes, swords and the Bleeding Chair … you’ll have to visit to find out what that is! But perhaps the biggest draw is the many ‘Spooky Spirits’ who supposedly live there. They include ‘The Grey & Pink Ladies’, ‘The Phantom Black Dog’ and ‘The Traffic Ghost’…

The Chilli Fest happens annually in August and Levens Hall is open from Spring until October each year. Nearby are the varied many attractions of the Lake District. For more details www.golakes.co.uk

© Zoë Dawes August 2009 http://quirkytraveller.wordpress.com
written for ’Have Kid Will Travel’