It is impossible to share the full experience of the Freedom Trail. I hope to provide an inspiring overview for you and urge you to see it for yourself, at least once. It is truly one of the greatest places in our country to grasp an understanding of our forefathers and their passion for our freedoms.

Boston is the “birthplace of American Independence” and has many, many books published exclusively about the Freedom Trail.

Because we were in the Boston area for so long we actually split our tour of historic Boston into about 3 days. With young children it was better not to try to put in too much in one day.

The Freedom Trail is marked by a red line in the sidewalk- it is either red bricks set into the sidewalk or a red painted line. The girls had a lot of fun “balancing” on the line. Because we most often came into Boston on the Harbor Ferry from Quincy we began our walking tour at Faneuil Hall. 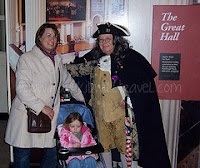 Faueuil Hall was built in 1742 by Boston merchant Peter Faneuil. The lower level was an open market and the upper a meeting room that became Boston's official town hall. Today the Faneuil Hall Marketplace has spread beyond the original building and houses over 40 shops, the Bullmarket- more than 38 specialty carts, 16 restaurants, 35 eateries in teh Quincy Market Colonnade and street performers (who are auditioned, insured and have must pass background checks.) My girls were completly enraptured by Mailk the Magic Guy who created amazing balloon art. If you're lucky you may even meet Benjamin Franklin! 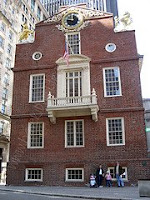 From Faneuil Hall it is a short stroll to the Old State House which is also the site of the Boston Massacre. If you come in on the subway the blue and orange lines (State Station) are located under the building. Built in 1713 this is Boston's oldest public building and now houses a museum. The site of the Boston Massacre is memorialized by a circle of paving stones below the balcony.

Following the trail you will next come to the Old Corner Bookstore, where The Scarlet Letter was published, followed by the Old South Meeting House where the Boston Tea Party began. Next is the site of the Latin School, the first public school in America which was attended by Benjamin Franklin, Samuel Adams, John Hancock and Robert Treat Paine.

Statues of Benjamin Franklin and Mayor Josiah Quincy now stand outside the current building- the Old City Hall which now houses a Ruth's Chris Steakhouse, among other things. Stand in the opposing footsteps or hop on the donkey near the gate. 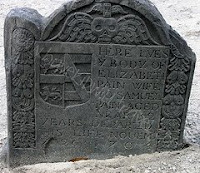 King's Chapel was built on part of the town's first burying ground, seized by Governor Sir Edmund Andros to build a presence of the Church of England. The burying grounds next to the church are not connected with the church; some of Boston's staunchest Puritans are buried here. Also laying here are Mary Chilton, the first Pilgrim to step off the Mayflower and Elizabeth Paine, the inspiration for Hester Prynne, heroine of The Scarlet Letter. Plaques say the William Dawes (the other man who rode with Paul Revere) is buried here; his relatives are, he is in an unmarked tomb in Jamaica Plain.

Next is the Old Granary Burying Ground with monuments to our Founding Fathers Samuel Adams, John Hancock, Paul Revere and other patriots. The five victims of the Boston Massacre lie near Samuel Adams. Also here is “Boston's Mother Goose”. She may not be the original but local lore says her son in law, a printer, published a book of her stories titled “Songs for the Nursery or Mother Goose's Melodies” based on her recitations to grandchildren. The girls could have cared less about the history here, but the monument to Ben Franklin's parents proved to be a great place to play.

Park Street Church, whose 217 foot steeple was the highest landmark in town, replaced the granary in 1809. It was here, on July 4, 1829, that William Lloyd Garrison gave his first public anti-slavery speech and in 1831 “My Country ‘Tis of Thee” was sung for the first time by the church children's choir.

On July 4, 1795 Governor Samuel Adams laid the cornerstone for the State House. Paul Revere was the Grand Master of the Masonic ceremonies and, in 1802, his foundry produced copper sheathing for the dome. 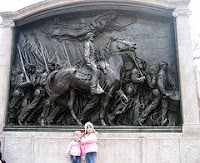 Crossing the street before entering Boston Common is the Shaw/ 54th Regiment Memorial, the nation's first all volunteer Black Army Regiment. It's a beautiful sculpture. Be sure to stop on your way into the Common and read the back.

Coming to Boston Common was a treat for the girls. In this 50 acre area where cattle used to graze an public hangings once took place you will now find a playground, the Frog Pond for wading or skating, depending on the season, the Brewer Fountain, imported from Paris in 1867, and plenty of room to run.

Boston Common is the official “starting point” of the Freedom Trail. If you come in by subway use the green line to Boylston Street Station.

Before leaving the Commons cross Charles Street to the Public Garden and visit the Make Way For Ducklings sculpture. The ducks are so cute and great fun to ride and “feed”. 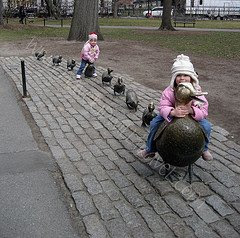 Because we began our self tour in the middle, we hopped the green line to North Station and found the Freedom Trail again on Hull Street at Copps Hill Burying Ground. This is Boston's second oldest burial ground. It contains the graves of few famous people but has amazing history none-the-less. The Complete Guide to Boston's Freedom Trail

has great information on some of the graves inside.

Just down the hill from Copps Hill Burying Ground stands the Old North Church: “one if by land, two if by sea”. It is Boston's oldest standing church building and is still used today, officially as Christ Church in the City of Boston. We spent quite a bit of time here reading the plaques on the pews and the walls. The pew boxes are unique and the boxes for the wealthy are sumptuous. There are usually staff on hand to answer any questions and we caught the end of a presentation on the building's history. There is a gift shop next door. Brenna really liked the tri-corner hats. 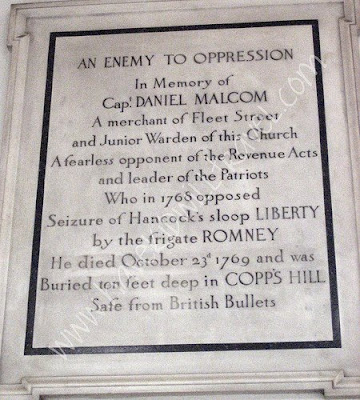 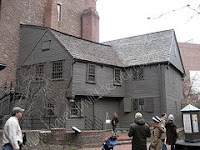 Through the Paul Revere Mall, around the corner and a few blocks away stands Paul Rever's house. It is the oldest structure in downtown Boston and you can tour it for $3. In the rear courtyard is a bell cast by Paul Revere, as well as tools of his trade.

You are now in Boston's North End, the oldest neighborhood in the city. Prosperous until independence, the area quickly became dangerous until the mid-1800s. From 1845 to 1855 50,000 Irish immigrants settled in Boston, many in the North End slums. As the Irish propered and moved out the Jews from Eastern Europe and the Italians moved in. Now the North End is undeniably Italian and has regained it's respectability and is well known for its Italian restaurants.

From here we walked back to Faneuil Hall for dinner before heading home. To finish the Freedom Trail I recommend taking the Navy Yard Water Shuttle from Long Wharf to Charlestown. There you will see the USS Constitution, the USS Constitution Museum and the Navy Ship Yard. If you choose to walk it is about half an hour from Faneuil Hall and 15 minutes from Copp's Hill Burying Ground.

Charlestown is the end of the Freedom Trail. It was once a community unto itself. We did Charlestown on a separate day but if you want to fit it in with the rest of the tour you want to get to the USS Constitution no later than 3pm.

The USS Constitution, or “Old Ironsides” as she is also known, is one of the Navy's first ships. President George Washington signed the act that built her and live oak was harvested from Georgia's sea islands- at 5 times stronger than common oak cannon balls bounced from her sides, earning the nickname. Only emotion saved her- twice- from being destroyed after her usefulness on the high seas. 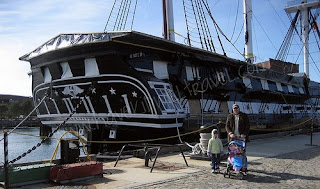 Today the USS Constitution is a commissioned ship. Active duty enlisted sailors guide you through the main deck and the first two levels below decks, telling tales of sea battles and the lives of 450 men and teen boys who lived on board.

For more about “Old Ironsides” be sure to visit the USS Constitution Museum. There is no entrance fee but donations are accepted. You can view artifacts from the ship and the interactive museum allows the girls to try a sailor's hammock. 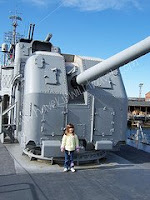 The Charlestown Navy Yard built, repaired and supplied ships for the US Navy. Today it is part of the National Park Service. Included in the Navy Yard are the destroyer USS Cassin Young which can be explored, Dry Dock No. 1 which has the dubious honor of hosting the USS Constitution as both the first and last ship to enter it and the Commandant's House, a 20 room residence which served as home for the Navy Yard's 63 chief officers and their families.

Also along the Freedom Trail: 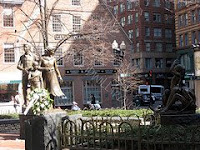 The Irish Famine Memorial, a moving tribute commemorating the 150th anniversary of the “great hunger” that brought so many Irish to the US and Canada.

The Boston Tea Party Ship and Museum was closed while we were visiting. It plans to reopen in the summer of 2010.

The Warren Tavern is the oldest tavern in Massachusetts. George Washington stopped here for “refreshment” and it was the location of Charlestown's first Masonic Lodge. Paul Revere, who became grandmaster of that lodge called the Warren Tavern “my favorite place”.

The New England Holocaust Memorial invites you to walk the path and reflect on the 6 million numbers etched in the galss while smoke rises from the bottom of the chambers. Lit from inside these are especially moving at night.

Near Long Wharf is a great playground. It can be a life saver when your kids are sick of looking and want to run and play.

Getting Around the Freedom Trail:

The Freedom Trail is easily walkable but there are a few other options:

The subway can take you to many points along the Freedom Trail. The green and red line both go to Park Street Station at Boston Common; the orange and blue line both exit at State Street Station under the Old State House; North Station, served by the green and orange lines, is an esay walk from Copp's Hill and the Old North Church. 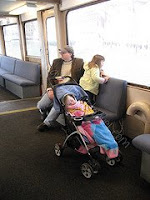 To easily get from Long Wharf to Charlestown Shipyard take the Inner Harbor Ferry. If you're coming from the south shore catch the commuter ferry for an entertaining and relaxing ride in to Long Wharf.

For an informative and entertaining tour try Old Town Trolley Tours. This is the orange & green trolley. We did a bit of recon one afternoon and rode the entire route. This is a great tour, and well worth the money. It goes off the Freedom Trail to some of Boston's other famous sites like the original Cheers and Fenway, allowing you to hop on and off all day. Our guide was great and they catered to the girls.

Around Faneuil Hall and the aquarium are many carriages. I don't know about you, but my girls love horses so carriage rides are a favorite for us. The guides have interesting bits of trivia to share.

Of course you can join one of many guided walking tours- often with historical characters leading the way.

I took way too many photos for this article. You can view more at my Flickr page.

Save money when you're touring Boston with the family! 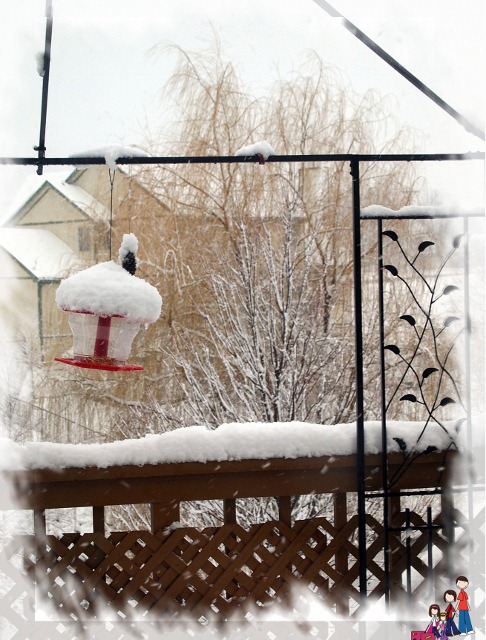 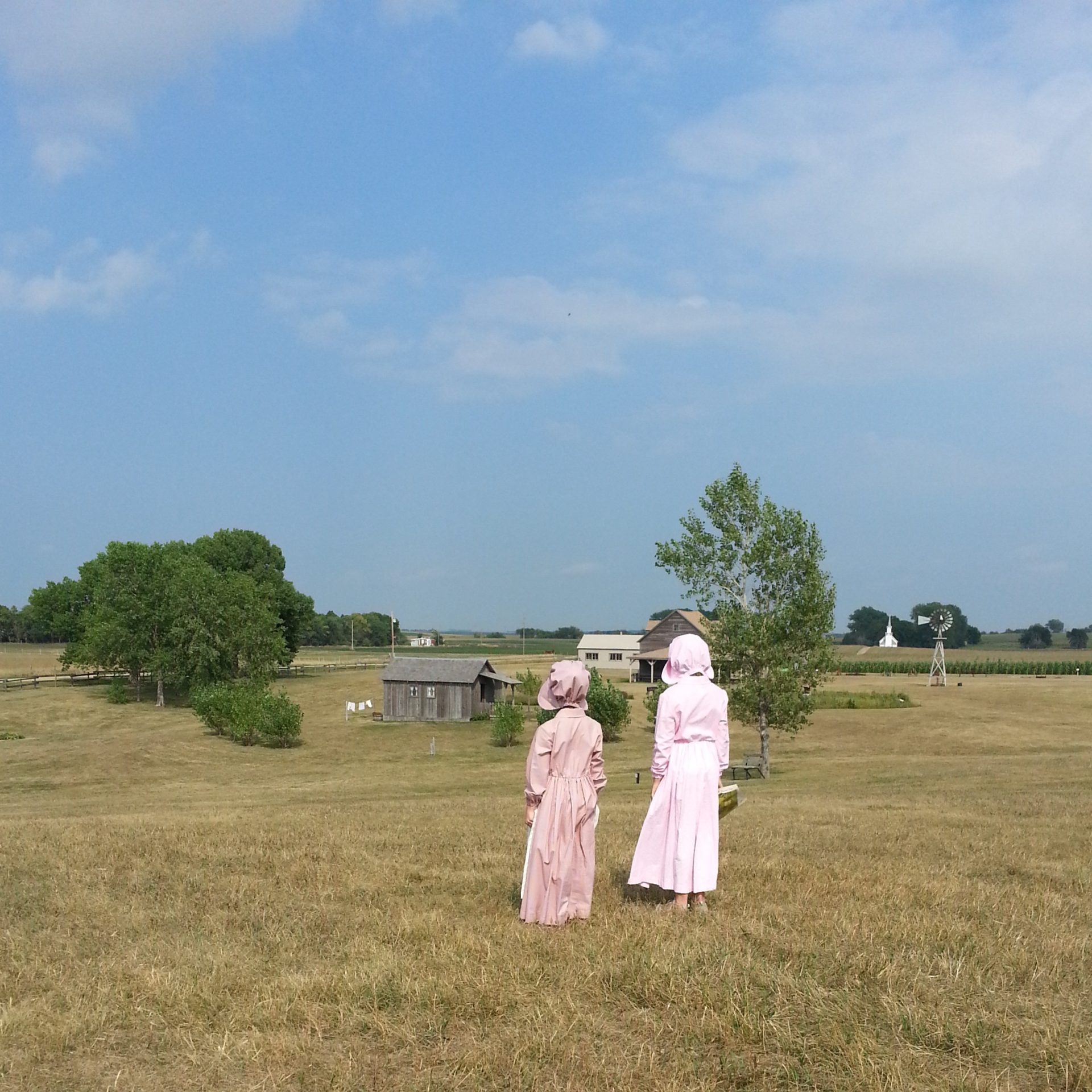 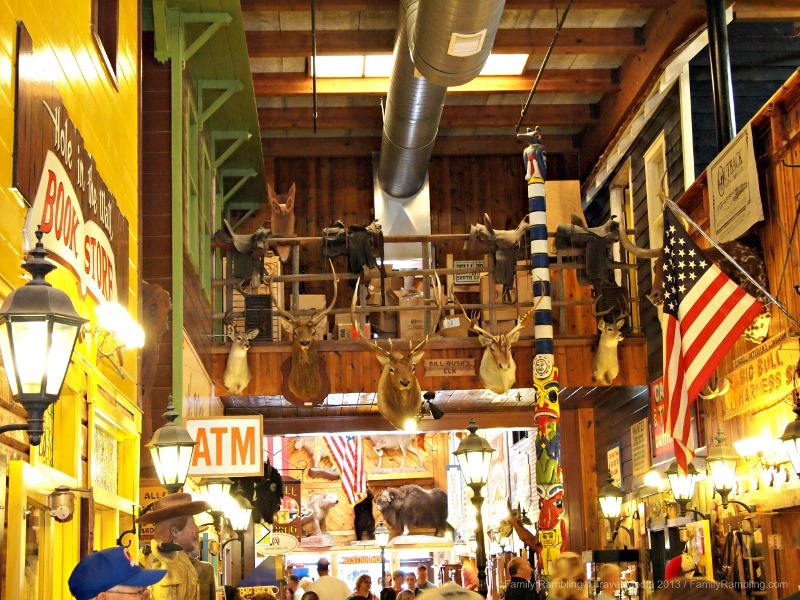